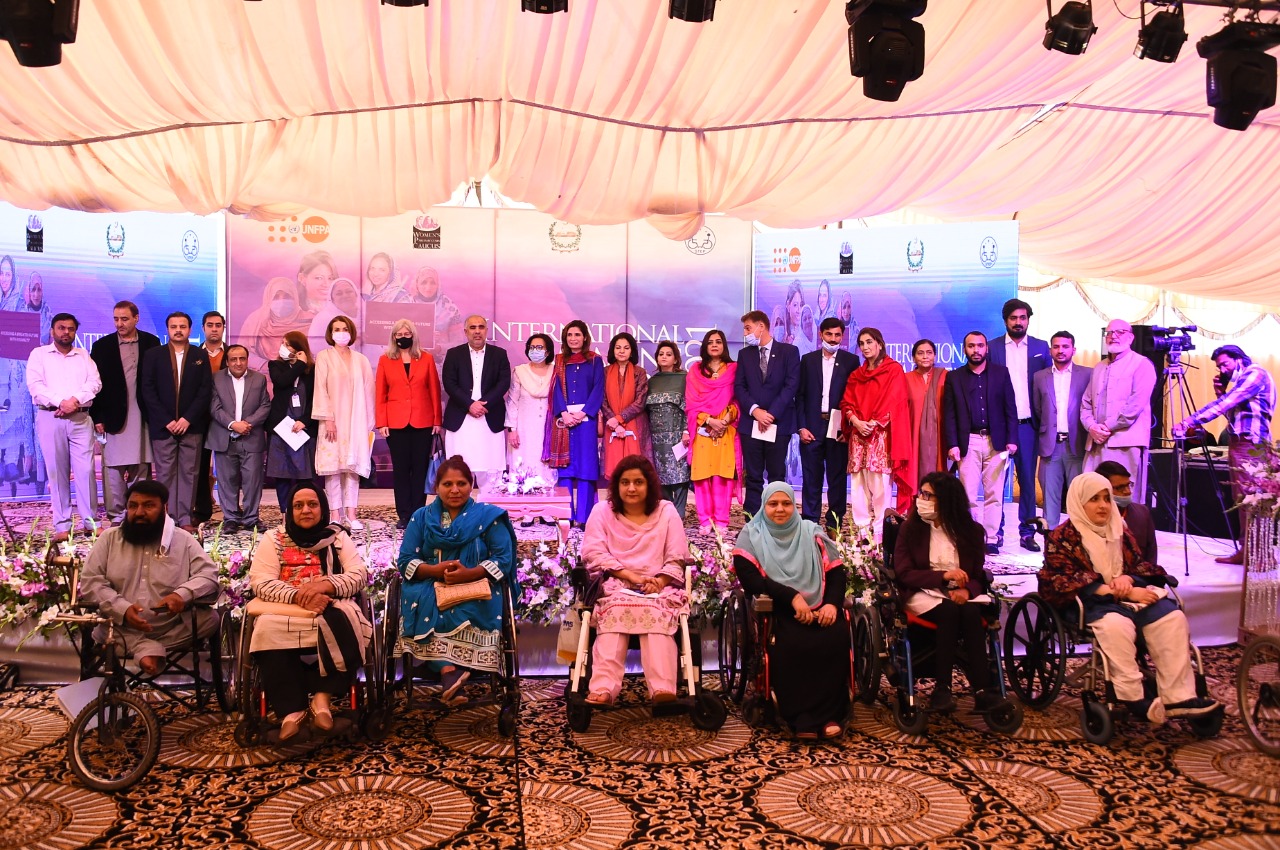 Women parliamentarians from several political parties as well as representatives from the government, media fraternity and civil society also participated in the event and pledged to put in efforts for supporting women and girls in Pakistan. They promised to play an active role in freeing the country from all forms of gender-based violence and discrimination.

The event was jointly arranged by the National Assembly, Federal Women’s Parliamentary Caucus (WPC) Step Pakistan and UNFPA Pakistan to kick off the International Women’s Day. With the current COVID-19 pandemic situation, “Women in leadership: Achieving an equal future in a COVID-19 world”.

Speaker National Assembly, Mr. Asad Qaiser graced the event as the Chief Guest. Secretary WPC Ms. Munaza Hassan gave the welcome remarks at the start of the event. Lina Mousa, Country Representative UNFPA addressed the event that was attended by parliamentarians, representatives of the government, women Achievers ,civil society and media, both virtually and in-person at the National Assembly.

Speaker National Assembly, Mr. Asad Qaiser while addressing the event, said: “The Government is committed to support women as a topmost priority. It’s time to recognize the role of women and take substantial steps for ensuring equal participation of women in legislation. Gender equality cannot be achieved without ending violence against women and girls. I take courage to inform you all that your assembly is taking special initiatives for persons with disabilities. I pay homage to all the women with disabilities who contribute to our society. I have also formed a special sub committee on PWDs under the leadership of Ms.Munaza Hassan . Women need to be encouraged and motivated and the present government was committed for the protection of women’s rights and providing them safe environment. In order to give women their due status, we also need to change the mindset and behavior. Joint efforts are needed to bring them into mainstream.”

While giving welcome remarks, Secretary Women’s Parliamentary Caucus, Munaza Hassan said: “   International Women’s Day is marked to highlight gender inequality around the world, raising awareness of the need for change and celebrating those who are already working towards a fairer and more equal world. This year’s International Women’s Day comes as the world continues to navigate the COVID-19 pandemic and its staggering impacts on women – from being pushed into poverty, to loss of jobs as the informal economy shrinks, to alarming spike in domestic violence and unpaid care burden. The Women’s Parliamentary Caucus is a cross party forum to ensure continuous and sustainable parliamentary discourse on gender-related issues. The Caucus provides a forum for all women to join hands and raise above party-lines to represent, legislative and oversee challenges to women political, economic, social and cultural participation. Women’s Parliamentary Caucus aims to enhance women’s role in participating in Parliamentary issues. It is a milestone in Pakistan’s Parliamentary history and a boost to the cause of Women’s rights in Pakistan.”

A Dashboard for persons with disabilities (PWD) is being launched today, we are taking all the possible initiatives  to ensure our support. Our guests today are Women With Disabilities who are rising high and shining bright in all the walks of life” she remarked.

Ms. Lina Mousa, Country Representative UNFPA commended the WPC’s role in promoting the agenda of women’s rights and leadership in the country. “It is great to be with you to celebrate International Women’s Day 2021. I would like to start by acknowledging the remarkable efforts of the National Assembly and Women Parliamentary Caucus for the leading this event which reflects the strong commitment of National Assembly to the cause of gender equality through achieving equal future in a COVID-19 world . The pandemic has strained healthcare systems, widened social-economic divides, and shifted priorities of public and private institutions including allocation of resources for women issues, deepened inequalities thus escalating gender based violence.  Women and girls are disproportionately affected, however, women’s roles has been exemplary during COVID-19 response ,”she stated.

Speaker National Assembly distributed wheelchairs and shields amongst the women with disabilities to honor their efforts and contributions. Speaker officially launched a Dashboard for persons with disabilities (PWD) created by the Women’s Parliamentary Caucus.