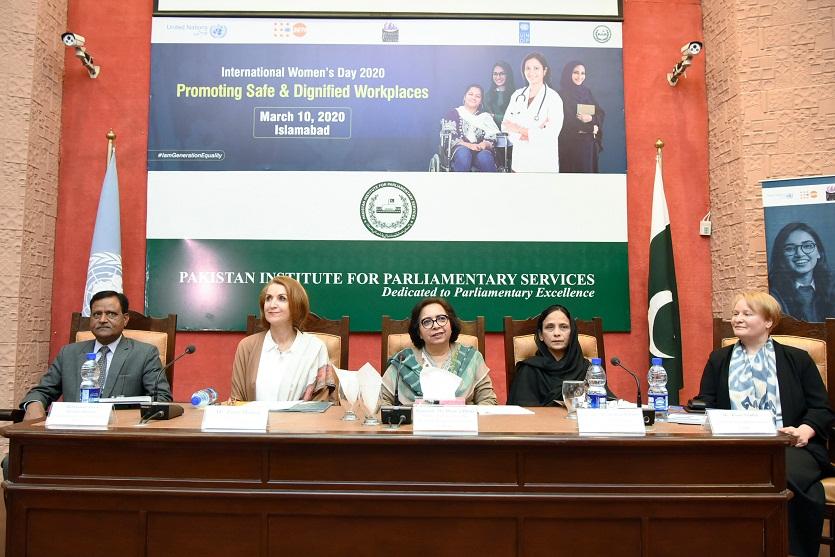 The one day seminar stood as post-legislative scrutiny of the Act which thoroughly discussed the progress, gaps and barriers to effective implementation. The event was attended by a jam packed auditorium comprising more than 150 participants including 25 MPs from National and Provincial Assemblies, Civil Society Organizations (CSOs), lawyers, university teachers and 40 members delegation from Govt College for women university, Faisalabad, students and faculty from Quaid e Azam University and Federal Urdu University, media men, relevant provincial departments such as ombudspersons, labor departments and social work departments.

In inaugural session, Executive Director PIPS Mr. Mohammad Anwar welcomed the participants of seminar and underscored the importance of holding such events leading to an intellectual discourse for resolving legislative issues. Resident Representative of UNDP Deputy Representative Ms. Aliona Niculita said at the occasion that, “Protection against Harassment of Women at Workplace Act 2010 is an important legislation for safety and protection of women at workplaces. Ms. Lina Mousa, Representative emphasized that “Gender Based Violence is a grave human rights violation that undermines the health, dignity, security and autonomy of its victims”.

Session Two: MNA Shahida Rehmani presented the Salient Features of the Protection against Harassment of Women at the Work Place Act, 2010. She said that the bill has provided mandatory protection to women who are a part of labour force. Ms Maliha Hussain, representative of Mehergarh, presented a review of ten years performance of the Act and underlined its various features. Ms Farida Shaheed, Member National Commission on the Status of Women said that the parliamentarians deserve appreciation on this landmark legislation.

Session Three: The session was followed by a thorough Panel Discussion among Conveners of Women Parliamentary Caucuses at National and Provincial Assemblies to discuss the situation in different provinces regarding protection of women rights and the role of provincial WPCs. They highlighted that the provinces have made tremendous progress in spreading awareness about women rights and protection against harassment.

Chief Guest of the event, MNA and Secretary Women Parliamentary Caucus of National Parliament, Ms. Munaza Hassan stressed on the inclusivity of the legislative process. She highlighted that we need to accept the flaws of our society and try to deal with the issues of sexual harassment with effective implementation of relevant laws.

The participants also partaken in the event through their questions to the panelists in Q&A session that was thoroughly answered by the worthy panelists and experts. In the end, Senior Director General (Research and Legislation), Mr. Muhammad Rashid Mafzool Zaka thanked partners WPC, UNDP and UNFPA for their active role. He also recognized panelists, subject experts, MPs and participants for their insightful contributions during the event; He thanks Mr Karim Gabol and Ms Rafat Yasmin from UNDP, Ms. Dilshad Pari and Ms. Rizwana Sagher from UNFPA. He highly appreciated the Seminar Organizing Team comprising of PIPS Young Eagles, Areeb Sherazi, Adila Shehzadi, Laraib Kiyani, Azeema Ilyas, Wajid Aslam and Asim Khan who worked tirelessly under the dynamic supervision of Mr. Muhammad Rizwan Manzoor and Mr. Abul Nabi Solangi.