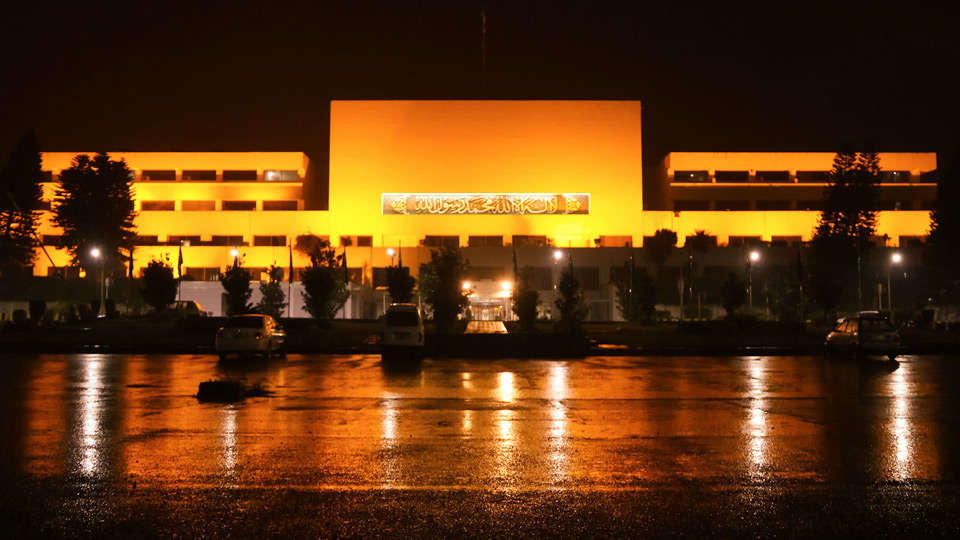 Islamabad, Pakistan — The National Assembly of Pakistan and President House buildings went orange on Wednesday to show solidarity with the global 16 Days of Activism campaign against Gender-Based Violence (GBV) and officially launch it in Pakistan.

Women parliamentarians from several political parties as well as representatives from the government, UN agencies and civil society also participated in the event and pledged to put in efforts for ending violence against women and girls in Pakistan. They promised to play an active role in freeing the country from all forms of gender-based violence and discrimination and stand with and support survivors.

The event was jointly arranged by the Federal Women’s Parliamentary Caucus (WPC) and UN Women Pakistan to kick off the 16 Days of Activism against GBV, a global campaign that takes place each year from 25th of November, the International Day for the Elimination of Violence against Women, to 10th of December, International Human Rights Day, indicating that violence against women is the most pervasive violation of human rights worldwide. The 16 Days campaign is used as an organizing strategy by individuals and organizations around the world to call for the prevention and elimination of all forms of violence against women and girls.

With the current COVID-19 pandemic situation, this year’s theme for the 16 Days of Activism against GBV is “Fund, Respond, Prevent, Collect!” The theme calls for prioritizing support and funding to essential services for GBV prevention and response especially in the COVID-19 situation, supporting women’s rights organizations working at the nexus of COVID-19 and GBV, declaring a national policy of zero tolerance for GBV with a concrete action plan, launching behavior change social mobilization campaigns, undertaking explicit measures to maintain services for survivors of GBV as essential during COVID-19 lockdowns, ensuring a continuum of adequate criminal justice response mechanisms, and collecting data with the aim to inform and improve GBV services and interventions.

Speaker National Assembly, Mr. Asad Qaiser graced the event as the Chief Guest. Secretary WPC Ms. Munaza Hassan gave the welcome remarks at the start of the event. Resident Coordinator United Nations in Pakistan, Mr. Julien Harneis addressed the event that was attended by parliamentarians, representatives of the government, UN agencies, civil society and media, both virtually and in-person at the National Assembly. Speaker National Assembly, Mr. Asad Qaiser while addressing the event, said: “The Government is committed to end violence against women as a topmost priority. It’s time to recognize the role of women and take substantial steps for ensuring equal participation of women in legislation. Gender equality cannot be achieved without ending violence against women and girls. Women need to be encouraged and motivated and the present government was committed for the protection of women’s rights and providing them safe environment. In order to give women their due status, we also need to change the mindset and behavior. Joint efforts are needed to bring them into mainstream.”

While giving welcome remarks, Secretary Women’s Parliamentary Caucus, Munaza Hassan said: “The world is undergoing significant social, political, economic and environmental development, which leaves a deep mark on our people – especially women of every household. With Covid-19 resurgence, the world retreats inside homes due to lockdowns, making situation even worse for women. Escalation in already existing pandemic of violence against women is quite visible. The Constitution of Pakistan negates any discrimination on the basis of gender. Its Articles 25(3) and 34 are the two most significant articles in favor of women. Article25(3) states that nothing shall prevent the State from making any special provision for the protection of women. The Women’s Parliamentary Caucus has been at the forefront of improving legislations for the rights of women and we will continue our efforts along with our trusted partners.”

“The fact that we have women in key decision-making roles of national importance, leading portfolios of human rights, social safety, health, and climate change, guarantees women protection and representation at all levels,” she remarked.

Mr. Harneis appreciated the pledge taken by all participants during the event, and expressed the hope that each person would follow through on this pledge in their lives to prevent gender-based violence from happening in all public and private settings.

He also commended the WPC’s role in promoting the agenda of women’s rights and leadership in the country. While acknowledging that Pakistan has made great progress especially in the area of legislative and policy reform, the RC highlighted that there was a lot left to do for effective implementation of existing pro-women laws. “The World Economic Forum places Pakistan at 151 out of 153 countries in its latest Global Gender Gap Report. But a positive sign is that women have around 24 percent representation in both houses of the Parliament, and women parliamentarians contributed 33 percent of the parliamentary business. With more women in power and decision-making, we can make great strides in advancing women’s empowerment and gender equality and eliminate all forms of violence against women and girls,” he stated.