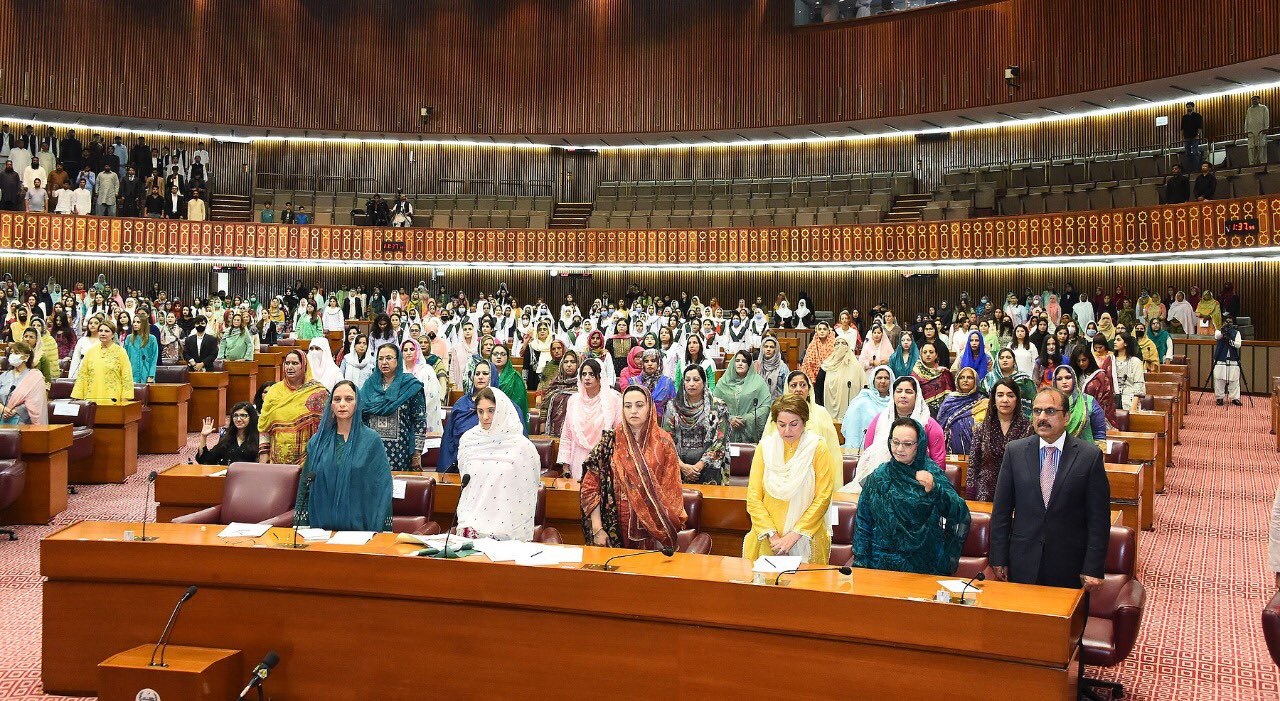 12 August 2022: National Assembly Hall, Parliament House, Islamabad– The event started with a recitation of the Holy Quran and was followed by the national anthem. Secretary Women’s Parliamentary Caucus (WPC) Ms. Shahida Rehmani welcomed all the guests and thanked the members, especially Speaker of National Assembly Mr. Raja Pervaiz Ashraf for joining them at the Diamond Jubilee Convention of Women Parliamentarians. She recognized the great contributions of these exceptional women leaders who were deeply committed to the cause of promoting women’s rights and political participation in all affairs of the country. She ensured everyone that WPC will remain working collectively for the cause of women to achieve the vision of Shaheed Mohtarma Benazir Bhutto who always wanted women parliamentarians to unite as a strong and united voice of Pakistani women.

A series of speeches were held on the floor of the House where parliamentarians and distinguished guests highlighted the role of women in the struggle for independence and the importance of their endeavors. They conferred how true progress demands equal female representation in all walks of life and salvation can only be hoped for by empowering our women, protecting their rights, and respecting their choices. A Q/A session was also held where the members enthusiastically took part in it.

A resolution was also introduced by Treasurer WPC Ms Wajiha Qamar. The resolution adopted at the convention said the women parliamentarians are committed to protecting and upholding women’s rights as enshrined in the Constitution and ensuring that their respective party manifestos provide a central focus to women in party policy so as to ensure social political and economic empowerment of women. “For it we, as legislators, pledge to utilize our legislative authority,” it said.

The participants acknowledged women’s illustrious contribution to the creation of Pakistan and its freedom struggle and recalled that the Constitution of Pakistan which recognizes the Quran and Sunnah as the basic source of governance, provides women full rights, rejects all forms of discrimination, and promotes their full participation in public life under Articles 25, 34, 35 and 37 of the Constitution. The resolution also noted that national and international commitments of the government of Pakistan including the National Policy for the Development and Empowerment of Women (NPDEW) 2002, underscored attainment for women in the public and political spheres.

They also paid tributes to all women leaders of Pakistan particularly Mohtarma Fatima Jinnah, Begum Ra’na Liaqat Ali and Shaheed Mohtarma Benazir Bhutto whose courage and exemplary contributions to public and political life had greatly inspired, built a sense of confidence and empowered Pakistani women. The resolution also acknowledged that inclusiveness and representation of women and men in health, education, economy, and politics validates the foundations of democracy and renders legitimacy to it.

Honorable Speaker National Assembly Mr. Raja Pervaiz Ashraf addressed the parliamentarians and guests where he shared his delight in acknowledging the struggles and sacrifices of the women leaders during the Independence movement. Moreover, he commended the active role of the Women’s Parliamentary Caucus in their collective efforts for pushing back barriers of gender inequality and reforming a legal framework. He also congratulated Secretary WPC MNA Ms. Shahida Rehmani for providing women parliamentarians a platform that strengthens and empowers women.

At the end Treasurer WPC Ms. Wajiha Qamar gave her closing remarks where she thanked Speaker National Assembly, Secretary WPC, honorable parliamentarians, and all the guests for joining them and promised that WPC will continue working for the empowerment of women all over the world.